Interested in railways? Trainspotter at heart? This blog gives you the rundown on the records held at Queensland State Archives that can help you research your passion.

This month marks the 150th anniversary since the completion of the first Queensland railway line from Ipswich to Bigge’s Camp (known today as Grandchester) on Monday 31 July 1865. The first Station Master was W H Norris who took up his post at Grandchester on 1 August 1865. The Queensland blue book: list of public servants employed by the Queensland government records his annual salary was £150.

Why were railways important?

As coastal shipping declined and rural production increased, a cost effective means for transporting products from the inland to local and interstate markets became vital.

Railway lines meant that wool from sheep farms, as well as other agricultural produce, could be transported by rail to Ipswich from the Darling Downs, and then shipped down the Bremer and Brisbane Rivers to the mouth of the Brisbane River at Moreton Bay.

No account of the Queensland railways is complete without alluding to the timeless debate about the size of the railway gauge. Major parliamentary debates on the 17 May and 1 June 1864 record some of the arguments for the narrow gauge were based on its economical nature and light weight rollingstock and rails. Those looking for more detail can view listings of proceedings in the Parliament about railways in the indexes to parliamentary debates .

The decision to choose the narrow gauge, 3 foot 6 inch (1.067 metres) rather than the standard gauge of 4 foot 81/2 inch (1.435 metres) was informed by the expense of tunnelling and excavating for ascending the gradient of the Main Range, the weight of the cargo being freighted by the engines, carrying capabilities of carriages, and the likely travel costs for first class passengers.

During the year 1865, the returns of railways, published by Public Works in the Statistics of Queensland for 1865, stated there was 21 miles of the Southern and Western railway from Ipswich to Toowoomba open, the remainder was under construction. For details view the Official records of the Government Statistician’s Office for 1865.

We have many other images of early railways from our collection, including lines opened in South East Queensland, on Flickr.

Railway line construction continued apace, and significant railway lines were opened to Beenleigh, Southport and Cleveland before 1900. There was also a dead-end main line to Central Station and a line to South Brisbane. Look closely in the foreground of this early photograph of the coal wharves at South Brisbane and you will see the South Brisbane railway line snaking along the banks of the Brisbane River. The map below shows the extent of the railway network in the South-East portion of Queensland including the Fassifern and Brisbane Valley Districts by the 1920s. This map is part of Item ID 299761 which can be viewed at the Archives. 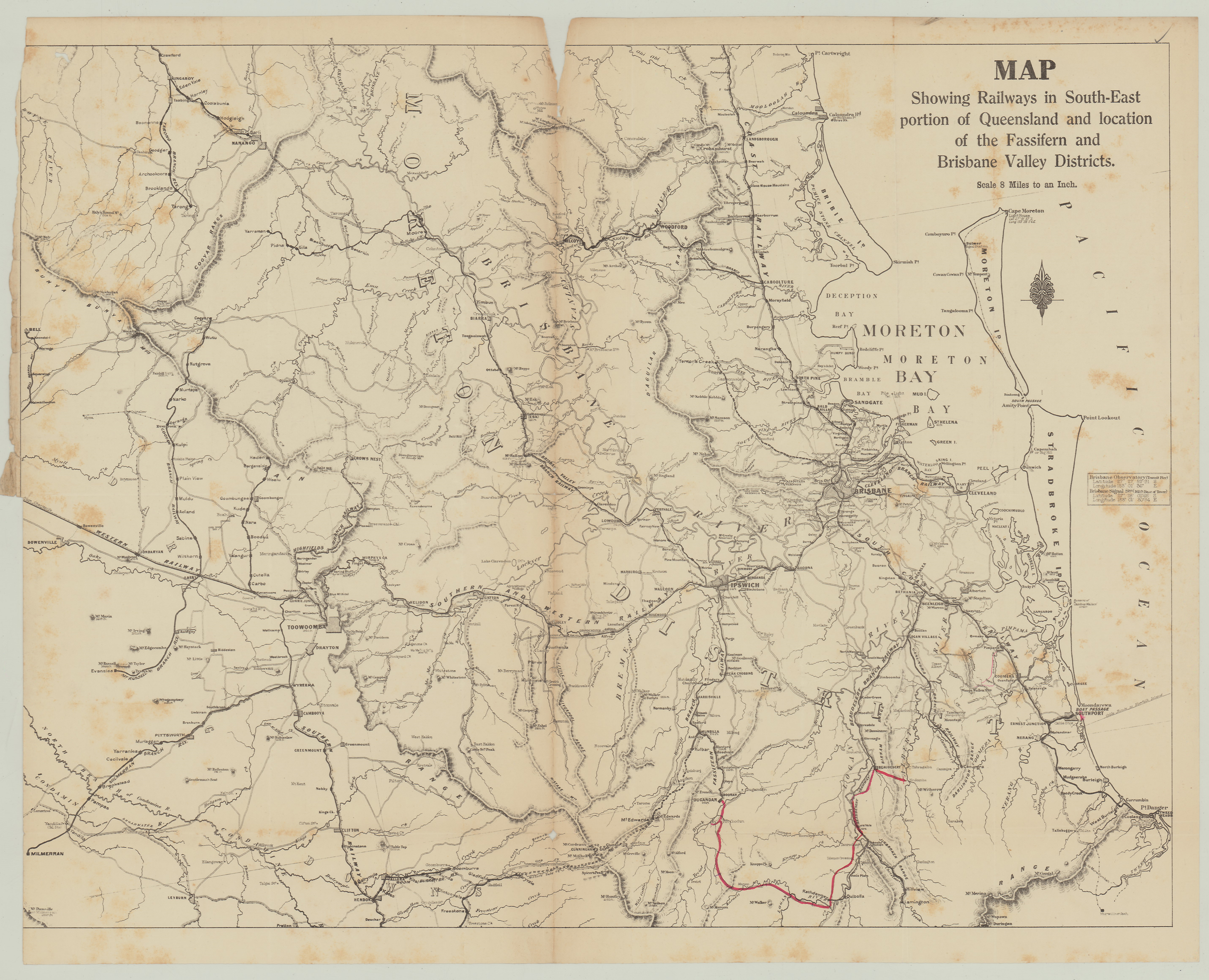 For more information about railways in South East Queensland, try the records created by the Chief Engineer’s Branch, Railway Department. These records include the original trial survey registers, books of reference, plans and sections of railway lines including those presented to Parliament.

And, if you want to read about the first Queensland built locomotive, the Mary Ann, please follow this web link to the Queensland State Archives’ web page – Queensland’s first steam locomotive.