The Australian Army’s slouch felt hat with its distinctive upturned left side of the brim and rising sun badge is an iconic symbol of the camaraderie of Australian soldiers. The slouch hat’s mark in history is rooted in Australia’s involvement in the First World War, although its history dates back to the 1800s.

Over time modifications were made to the slouch hat including the addition of feathers from birds, in particular emus. Slouch hats, resplendent with plumes, are clearly displayed in this photograph of the 2nd Light Horse Regiment, First World War troopers.

What prompted such flamboyance? One suggestion is that the plumage made the Queensland Light Horse units distinguishable from other troops.

But why emu plumes and who is the enigmatic Chauvel we mention in the title to this post?

One theory is that Henry George ‘Harry’ Chauvel, a commanding officer in the Queensland Mounted Infantry, and Major Percy Ricardo, a fellow officer, put pet emu feathers in their hats and the decorative effect caught on.

A variation on this story is that while providing aid to the civil powers during the Great Shearers’ Strike of Queensland in 1891, the Queensland Mounted Infantry rode down emus for sport, and then decorated their hats with the breast feathers of the birds.

Time passed and Chauvel became the commanding officer of the 1st Australian Light Horse Brigade. Reports circulated that Chauvel had “very strong feelings” about who should and should not wear the plumed hats. This feeling was supported by many who saw the emu feathered hats as a representation of Queensland mounted troops. However, there is an interesting turn in this story: this faded 1916 newspaper article pays tribute to “An Anzac hero”, Sergeant Duncan Fraser, who was photographed with the feathery embellishment on his slouch hat. 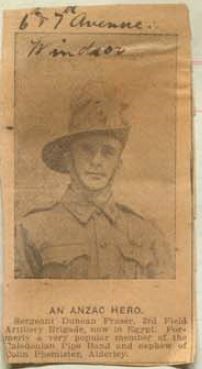 Readers may not be surprised to learn this memento is appended to Fraser’s entry in the Windsor Town Council 1915 Honour Roll, because the roll is a list of civilians who volunteered and served in the First World War. The interesting fact is that when he was killed in action in France on 28 June 1916, Sergeant Duncan Fraser was a field artilleryman. This seems to confirm that the decorative plumes were no longer only used by light horsemen. One thing is clear, and that is that the flamboyantly plumed slouch hats worn proudly by Chauvel and other Australian soldiers remain an iconic symbol of Queensland fighting men of arms.

Learn more from these websites: