Our recent What’s in a Name blog covered some of the many unusual and intriguing names we find in the Archives, and looked at how a name can lead us on a merry trail to discover the stories hiding in the records. Stories that shed light not only on the individual but also Queensland’s past.  “Mostyn Hanger” was another unusual name that caught our eye.

So who was Mostyn Hanger?

Looking through the archives we discovered a wealth of information giving us a glimpse into his life. Let us start at the beginning…

Following older sister Myfanwy, Mostyn was the second child of Thomas and Myfanwy Hanger born in 1908 at Rockhampton. What could have inspired his parents to give their only son such a unique first name? Perhaps it was a name passed down through generations of Hangers, or it was related to his mother’s Granville-Jones ancestry? His mother’s name Myfanwy is of Welsh origin and there is a small village in Wales called Mostyn. Could this be where the name originated from? Mostyn is also a reasonably common surname in parts of Wales and England. Perhaps this explains the choice of name for baby Mostyn.

His father Thomas Hanger started his own career as a pupil teacher in 1891.  Comments in his teacher record from that time indicate that he was an excellent disciplinarian and his teaching was incisive and very effective.  After Mostyn’s birth, Thomas Hanger taught at Rockhampton Central Boys (1903), Jericho (1903-1909), Mount Chalmers (1909-1912), Rockhampton North Boys (1912-1913) and Maryborough West (1914-1915) before finally settling in at Gympie State High School in 1916 as Head Teacher. During this period the Hanger family continued to grow, adding another three children to the ranks, Eunice, Gwendda and Winifred.

Sadly Mostyn’s early school records have not survived, however we discovered that he attended Gympie High School from 1921 until 1925 alongside his sisters, Myfanwy and Eunice. From the same School Administration File we learn that in the year they started, the school underwent a substantial makeover; additional land was purchased for the school, the main road that intersected the old and new school properties was closed to traffic, andnew classrooms and verandas were built to accommodate the growing number of students like Mostyn and his siblings. 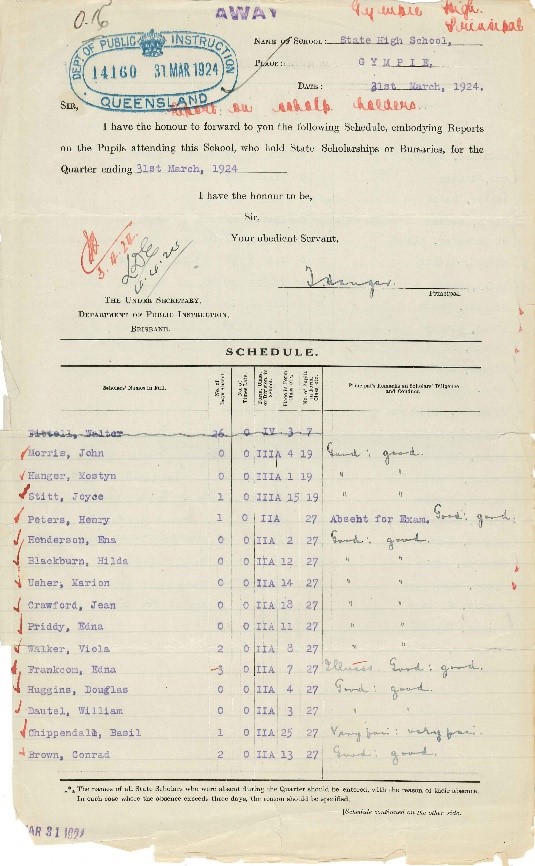 This document shows Mostyn as holding first place in his class of 19 students in 1924.  Notice that the form is signed by Head Teacher T Hanger – Mostyn’s Dad. QSA Item ID 13366.

Perhaps it was his father’s good disciplinary approach and effective teaching style that encouraged Mostyn to study hard and achieve good results. He sat the Junior Public exam in 1923 then the Senior Public Exam in 1925. Looking at his examination results we find that he studied three languages: English, French and Latin along with Arithmetic, Algebra, Geometry, English History and Geography completing his studies with Chemistry.  He received five merits and four passes securing a junior certificate and an extension scholarship initially then later scholarship to the University of Queensland for both the Faculty of Arts and Faculty of Science. With such high achievements Mostyn had a number of study options available to him including Law, Medicine or Education; all at the tender age of 17.

Young Mostyn chose to study the law! He graduated with a Bachelor of Arts in Law in 1929 and was admitted to the Bar in 1930. A copy of his signature on Queensland’s Roll of Barristers can be seen below.

State Archives holds a copy of the original register which dates back to 1835 and documents all barristers admitted into practice in Queensland over the last 181 years. Mostyn’s name is in the middle confirming his admission as a barrister on 25th November 1930.

The rest, as we know is history or is it? Other archival records at QSA let us dive deeper and discover even more about Mostyn’s career. Various newspaper clippings from The Australian, Courier Mail and Telegraph located in the Premier’s Batch Files provide a narrative on his career and highlight his promotion to Chief Justice of the Supreme Court in 1971.  Several articles in the batch file cover the “competition” as several other candidates were considered for the role, including candidates from other states. However, it is clear from an article in the Telegraph dated 11 February 1970 that the newspaper favoured Queenslander Mr Justice Hanger for the role. A description in the article about his career is quite emotive as it surmised that Mostyn quite simply had a “brilliant legal career.” Other arguments in favour for his case include a cablegram dated April 1970 to Yarrawonga, London advises of the approval for The Honourable Mostyn Hanger to be appointed as Senior Puisine Judge and to also as Acting Chief Justice of Queensland. Another cablegram dated 13th May 1971 announced Mostyn’s appointment. Mostyn remained in this role for a further six years until he retired in 1977.

But that’s not all…Mostyn married Greta Robertson in 1936, and they had a son, John Mostyn Hanger  who followed in his father’s footsteps to become a well-known District Court judge from 1976 to 2001.  Another son, Ian Hanger became a QC. His sister Eunice became a well-known playwright and a highly regarded academic at the University of Queensland, where researchers can find the Eunice Hanger Collection containing letters to her famous older brother Mostyn.

So that is part of the story of Mostyn Hanger. All that information was discovered from chasing just one unusual name we found in an index. Queensland State Archives holds such a variety of records, that with some diligent research, from just one name in an index an entire story and a life can be revealed.