It’s our unofficial anthem. But as we sing along to this seemingly light-hearted ditty, most of us are blissfully unaware of the history that underpins A.B. “Banjo” Paterson’s most famous work.

It is widely agreed that the inspiration for Waltzing Matilda came from the death of shearer Samuel Hoffmeister, known as Frenchy, and that the story (particularly in its original form) is a carefully worded political allegory, commenting on the conditions surrounding the shearer’s strikes of the 1890s.

On the night of the 2nd of September in 1884, the ongoing tension exploded into violence, as striking shearers set fire to the Dagworth Woolshed in an attempt to prevent squatters from using scab labour. While the woolshed burned, incinerating dozens of sheep, a gun battle raged between the opposing sides. In the aftermath, Hoffmeister, a unionist almost certainly involved in the violence, was found dead – shot through the roof of the mouth – at the unionist’s campsite at the nearby Combo Waterhole. 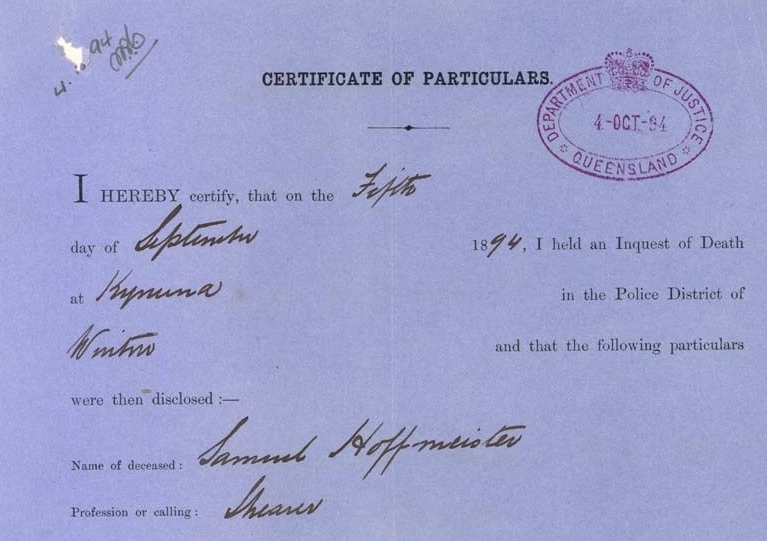 Queensland State Archives holds the record of the inquiry into Hoffmeister’s death held just days later (QSA Item ID 2732718). The inquiry’s official finding was ‘Suicide by Shooting’ and legend has it that Frenchy shot himself to evade capture by the authorities. The depositions contained in the inquest file have a slightly different story to tell, however. Despite the short time between Frenchy’s death and the inquiry, the witness statements vary wildly in their accounts. This has led some historians to question the ‘suicide’ finding, especially considering the tense political and economic climate at the time.

Whatever happened that night, it is true that Banjo Patterson visited Dagworth station not long afterwards and, hearing the story, was inspired to write the iconic ballad Waltzing Matilda.