The following transcript is of a letter written by Michael Arbuthnot Fraser on the 12th November 1916.

Tell Mrs S I got her first letter & the last one & I don’t know how I can thank her for her thoughtfulness in having my clothes attended to for I am sure they needed cleaning. When I arranged for Mr Hall to pay the sum of £3 pound per quarter I should have written and told you that was a present for the children, it is the least I could do & think now I would like be romping with them instead of being a soldier. 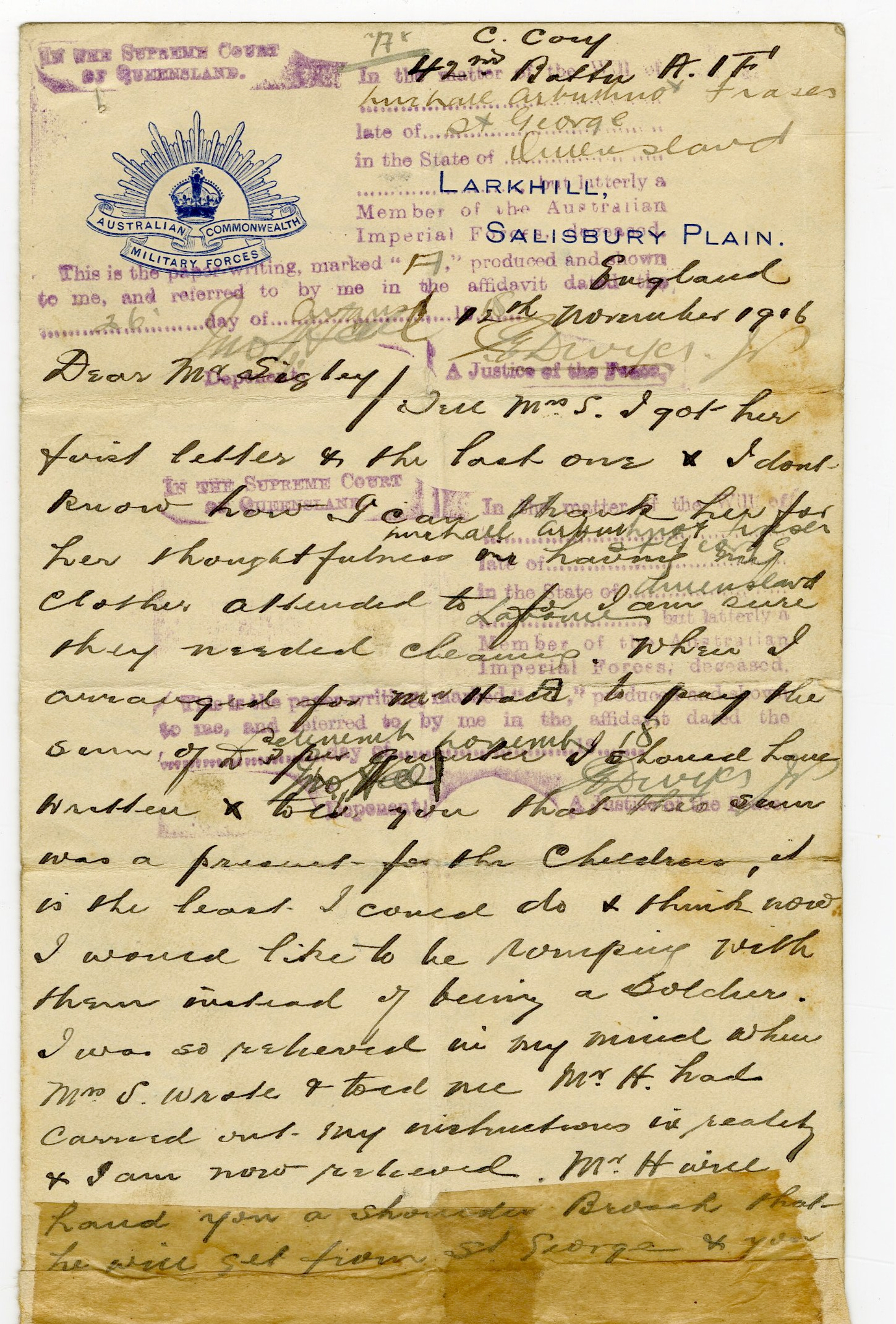 I was so relieved in my mind when Mrs S. wrote & told me Mr H. had carried out my instructions in reality & I am now relieved Mr H will hand you a shoulder broach that he will get from St George & you will place it among the scotch kilts I left in St George when I left – write & tell me when you get it so that I will know.

These with Mr Halls assistance could be raffled or other wise for that sum & Mr Hall & Mrs Sigley are to equally divide the money. Mrs S handling or keeping her share for the children (that is if I am killed)

I have written to Mr Hall in this respect.

I hope I am not killed but that I will return again & don’t let this stop you in writing to me often & telling me all the news.

Private I have not had a letter from Mr Hall since I left. I think this most unkind but don’t you say a word.

I did not hear until you wrote saying that Wilson was killed. I am very sorry & tell Mrs Sigley to remind me to his Mother & tell her how sorry I was when I heard of it, he was a fine boy & from my observations if left to his true self the makings of a noble young man.

I am sorry to hear Mrs Ruff lost her baby & old Dick Coribon pegged out. Of course this was expected in @ case as he was a full blooded man & a heavy drinker. It would have been better if he had never touched it.

Love to Dorris I hope she is getting on well at school & beginning to be a help to her mother & the same to Gordon. They are dear children & tell them to be good to their Father & Mother & the Good Lord will help to prosper them & the same to the little chaps who spilt the ink pot & the same to you & Mrs Sigley with a severe wish that you all will enjoy good health without the riches & that God will hover over you all.

We have a lot of Australians here with more company from Canada & other places. We all wish the War was over. I can assure you that we are winning & this is the opinion of all the great-experts. The German people that is the poor & middles classes are much deluded & I fancy it will not go the 3 years as predicted. This country is full of untold wealth & its money could buy all the nations put together.

I was in Egypt, France, Scotland (twice), London. I think I sent you a p.c. [postcard] from Scotland the past trip.I had went [gone] through Sterling Castle saw a great deal. Think & pray for me – when I think you have this letter I will make myself believe that you will do so.

I am going towards the Trenches next week.