Few Brisbanites would know that the still-working Victoria Barracks, on Petrie Terrace, began its life in the heart of Brisbane Town in the 1800s.

Free settler discontent with the raucous behaviour of those living and working at the garrison resulted in the building of new barracks on the elevated site now known as Petrie Terrace (named after the Petrie brothers who had built Her Majesty’s Gaol there in the 1850s).

As the colony grew, so did the need for civil controls, and in 1864 David Thompson Seymour was appointed as Queensland Police Commissioner. Commissioner Seymour issued Rules for general government and discipline of members of the police force of Queensland for the guidance of police.

Then, in 1868 the Queensland Government and the incoming Governor Colonel Samuel Wensley Blackall had the garrison withdrawn from Queensland because a military force was seen to be no longer needed. For the number of soldiers paid monthly from 1 January 1867 to 30 April 1868, researchers may view the Queensland Audit Office letter to the Governor in Item ID 858484 (page 297).

Following the removal of the garrison, Victoria Barracks were occupied by the Queensland police force for the following decades.

Meanwhile, the Volunteer Act 1878 introduced a volunteer defence system for Queensland. Under the Crown Lands Alienation Act 1868 substantial land grants were awarded to those who joined.

As time passed, defence threats again resurfaced. In particular there was concern about European powers including France and Germany entering the South Pacific. Colonialists in Australia had long been interest in annexing the eastern part of New Guinea, as published in this 1876 report – Correspondence on the subject of the proposed annexation of New Guinea, and with reference to the principle of contribution by the Colonies interested in the scheme. In response to the perceived threats, Premier Thomas McIlwraith acted. The annexation of the south-eastern section of Papua New Guinea and adjacent islands was proclaimed in the name of the British Government on 4 April 1883.

The British Government strongly rebuked McIlwraith, and repudiated the claim, as detailed in this report from Earl of Derby addressed to the officer administering the government of Queensland, dated 11 July 1883. 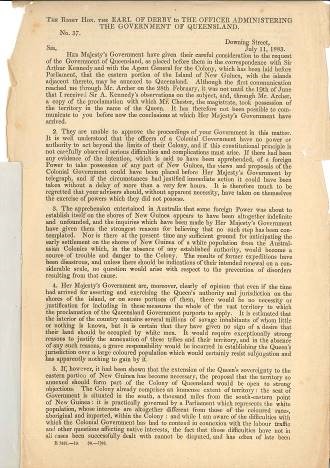 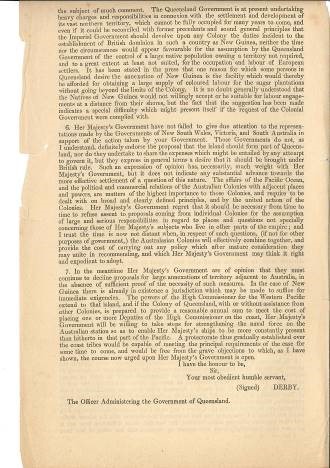 A year later, Germany took possession of north-east New Guinea. This spurred the British Government to declare the southern half of New Guinea a British protectorate. Key facts about the annexation are available here.

Ongoing defence concerns lead to George Arthur French’s appointment as the first Commandant of the Defence Force (Land) on 1 September 1883 (the Queensland blue book records that French served in this capacity until 1891). The Queensland Defence Act 1884 was passed after the repeal of Volunteer Act 1878. For readers interested to follow the passage of the Defence Bill through the Queensland Parliament, begin by viewing the Indexes to the Parliamentary Debates.

The most serious conflict Queensland colonial forces were involved in prior to 1901, when the Australian Commonwealth Military Force was formed, was the South African War. Military service and pay records of the South African Contingents are searchable on our website on the Boer War indexes 1899–1902 web page.