The strength of home front emotion can be found within the most unpredictable records. Take the rather dull sounding letterbooks for the Queensland Government’s Harbours and Rivers Department. These contain copies of memos and letters that provide insight into administrative instructions. What might surprise you is that, besides finding feelings of patriotism and support for the troops, amongst the organisational correspondence in the 1915/1916 letterbook there is also suspicion and hostility for people of German and Austrian ancestry working in the department.

The then current head of the Department was engineer Edward Cullen, who had worked for the Government since 1883. [Qld Government Blue Book, 1916]. On 4 August 1915 Cullen issued a memorandum stating that on the following day at 10 am, all Government staff were to suspend work for five minutes, to commemorate the first anniversary of Britain’s declaration of war. Cullen’s support for the war effort can also be seen in his approval on 4 November 1915 for a punt to be used at a riverside fete at Mowbray Park organised by the South Brisbane Patriotic Fund.

On the same day a memorandum was issued by Cullen, that illustrates the suspicion manifesting at this time. The memorandum states that ‘any person expressing disloyal sentiments will not be retained in Government employ. Should you be aware of any such occurrence… immediate action is to be taken.’

Shortly after, on 29 November 1915, a crew member of the departmental dredge Casuarina, named A. Doebler, was challenged by a naval sentry at the Brisbane docks ‘on grounds of his German origin’. This prompted Cullen to write to the Under Secretary of Treasury, asking what action should be taken regarding Doebler and two other Department employees with German sounding family names. Cullen in his note seems to support Doebler highlighting that he had started with the Department in 1912 and was an ‘attentive and willing worker’.

On 17 January 1916 Cullen was asked by the Under Secretary of Treasury to forward a list of persons of German or Austrian parentage currently employed by the Department. A rough copy was furnished including ‘those with foreign sounding names’. On the list were the names of 14 men, whose nationalities included Swedish, Danish, Finnish and Dutch.

The non-German and Austrian names were excluded and a revised list with only five names was sent onto the Under Secretary on 18 January 1916. It is interesting to note that two of the men on the list, Meckelburg and Sontag, were born in Australia with German parents. The final man on the list, Meyer, was born in Hanover with his parents’ nationality identified as Hanoverian rather than German. In the remarks column it was noted that Meyer was ‘born in 1849 prior to annexation by Germany’ and he had a ‘permit from Military Authorities to work at dock’ and a son who was serving with the ‘AIF at the front’. 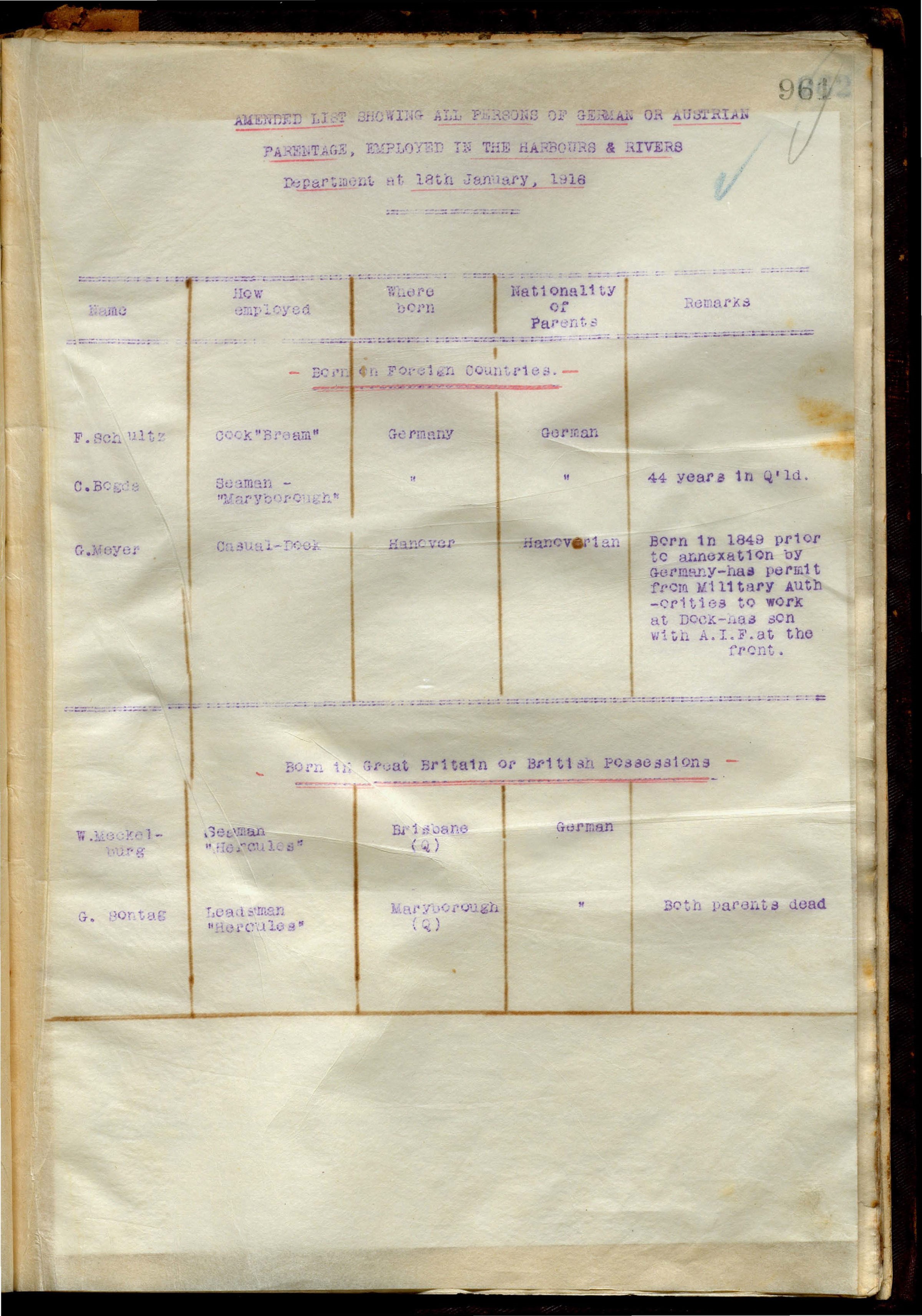 Newspaper reports reveal the source of the request for the list of German and Austrian names was the Acting Premier and Treasurer of Queensland, E.G. Theodore. On 19 January 1916, the Acting Premier announced the Queensland Cabinet had decided that ‘employment is not to be given to any persons of German or Austrian birth by any department while there are Britishers willing to be employed’. Theodore also mentioned that in one or two cases where men of German parentage held ‘responsible positions in connection with the harbours of Queensland, they have no longer been retained’.