At the outbreak of the First World War, one of the many tasks of Queensland’s Lieutenant-Governor, Sir Arthur Morgan, was to send secret despatches concerning domestic affairs to the Secretary of the State for the Colonies based in London.

The first secret despatches sent after the commencement of war were written on 2 September 1914 and outlined events which occurred during the three months ending 30 June. However Morgan also includes in his despatch reports on events after this cut off point:

The Governor-General was to have paid a visit to Queensland on the 10th of August, to open the Annual exhibition of the National Agricultural and Industrial Association, but the out-break of war between Great Britain and Germany and Austria-Hungary compelled him to cancel the engagement. You will be interested to hear that, not-withstanding the disturbance caused by the war, the exhibition – the most important gathering of the year in Queensland – was a very gratifying success, the exhibits being more numerous and of higher quality, and the attendance larger that in any previous year …

Morgan also comments that “Here, as elsewhere throughout the Empire, the outbreak of war was followed immediately by the laying aside of political differences. Government and Opposition forces at once took concerted action to devise and pass measures for the common good”.

The rest of the despatch provides some statistics for Queensland and some of the highlights for the year include:

Now let’s jump to January 1920 when Governor Hamilton John Goold-Adams is just about to vacate his position. In this secret despatch, Goold-Adams reflects on the state of Queensland after his arrival in March 1915. 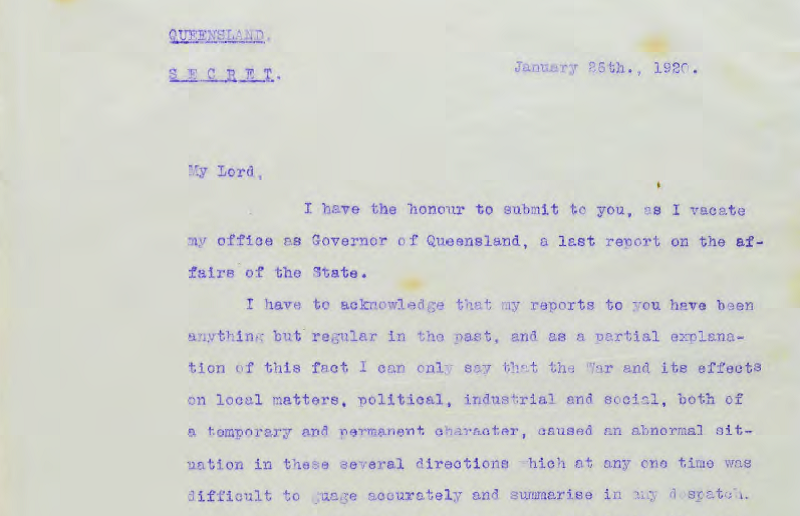 As well as providing one of the wordiest excuses for not filing regular reports on the affairs of the State, Goold-Adams provides reflective summary information about many aspects of the State including primary and secondary industry:

It wasn’t only industry that concerned Goold-Adams, the political challenges he faced were also included within the despatch:

In 1918 … Mr. Hughes, the Commonwealth Prime Minister, had already announced his intention of introducing conscription and this was being actively opposed by the majority of the Labourites throughout Australia and by many others, especially the women-folk, who were fearful of their sons, their brothers and their lovers being sent away to die. In this State another, and fairly numerous section viz. the German farmers, who have been disenfranchised by the Federal authorities, changed their previous anti-labour views and became supporters of the State Labour Ministry….. I am pleased to be able to say that throughout my term of office my relationship with my various Premiers, Messrs. Denham, Ryan and Theodore, and the members of their several cabinets has been most harmonious. The one exception has been Mr. Fihelly……

What emerges when reading these confidential despatches isn’t only the challenges that Queensland faced during this turbulent period, but the personal reflections of those that served as Governors, offering an intimate perspective on this pivotal point in Australia’s history.