In 1917, Laura Duncan (1875-1955), a determined widowed mother who braved the outback of Queensland, took on the might of the State of Queensland. Mrs Laura Duncan was the then owner of Mooraberrie cattle station situated more than 1000 kilometres north west of Brisbane. The station had been previously under the management of her husband, William Duncan.

The Duncans, with their four children, took over the lease of the Mooraberrie cattle station in October 1906 as evidenced by this Treasury rent ledger entry recording the transfer made to William.

Sadly William died in 1907, and this tragedy was compounded by the loss of their only son. This left, as detailed in the Pastoral Review and Grazier’s Record, a “courageous Australian woman [to overcome] droughts, slumps, labour troubles and isolation, as she reared three daughters […] in their ‘sandhill country’.

It would be a herd of shorthorn that would lead to Mrs Duncan’s dispute with the State of Queensland. Mrs Duncan intention was to sell off steers interstate, but government legislation denied the freedom to trade between states. Furthermore, provisions in the Sugar Acquisition Act 1915 empowered the Ryan government to compulsorily seize cattle and other livestock, in the name of His Majesty, King George V.

This block on trade led to solicitors, acting on behalf of Mrs Duncan, issuing writ number 389 of 1916 against the Queensland Government over its use of powers under both the Sugar Acquisition Act 1915 and the Meat Supply for Imperial Uses Act 1914. 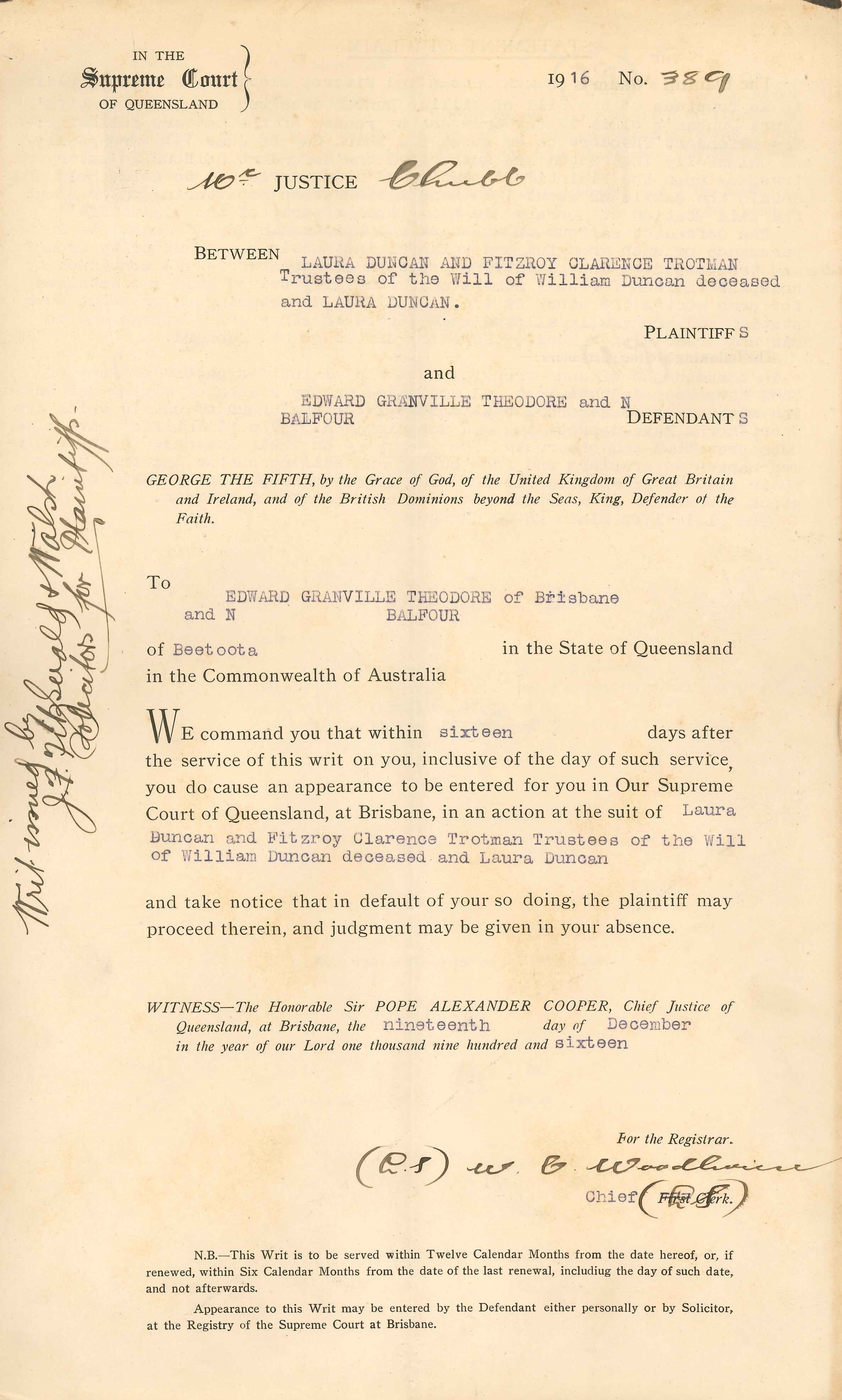 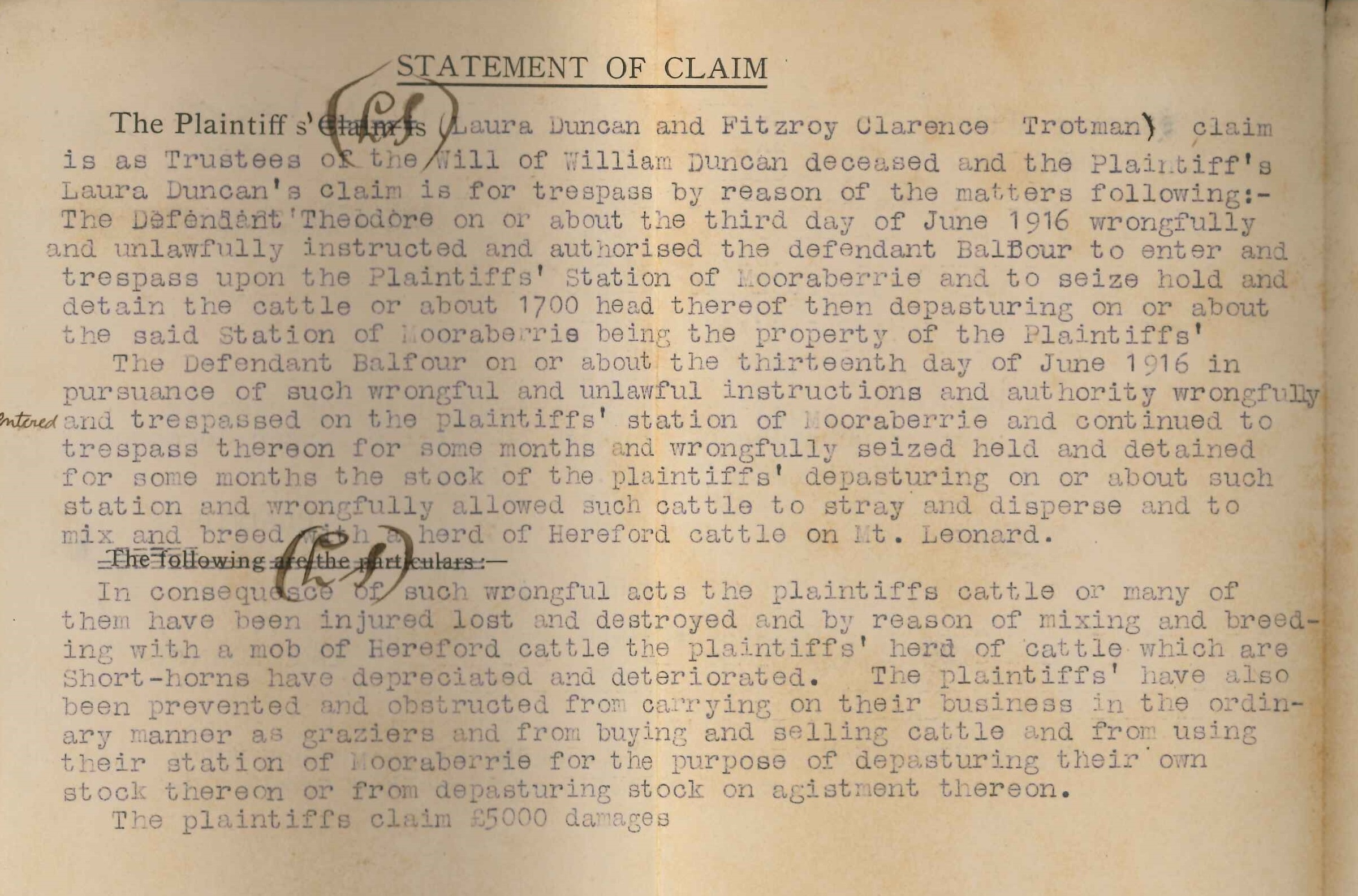 The legal powers exercised under the Meat Supply for Imperial Uses Act 1914 were also questioned by other Australian states. Alarm about the threat to supplies was expressed by South Australian Premier Crawford Vaughan to Queensland Premier T J Ryan on 10 April 1916 in this top numbered letter number 7865/19: 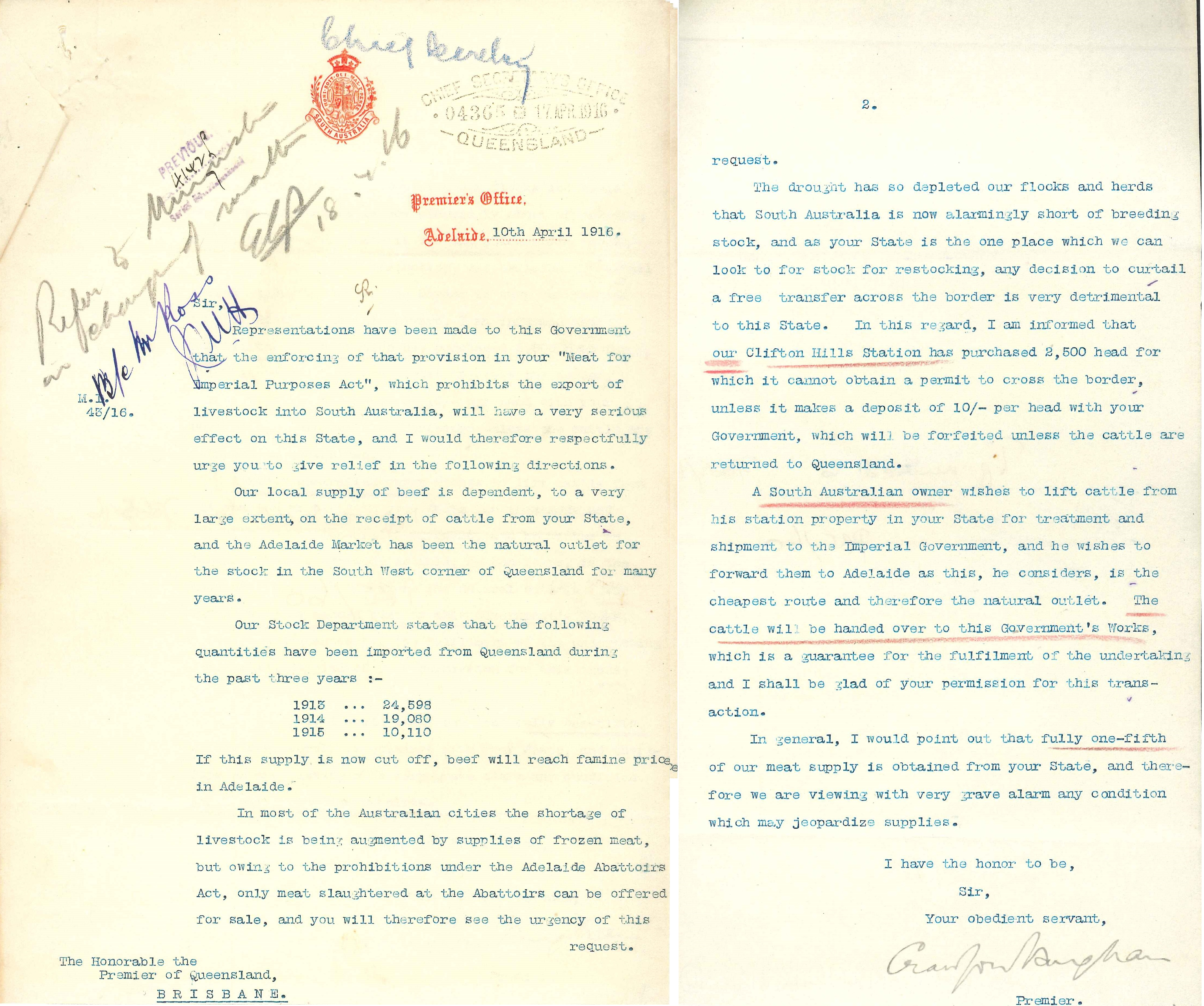 Learn more in correspondence about the imperial meat scheme created by the Chief Secretary’s Department.

Despite these concerns, as the war continued the Meat Supply for Imperial Uses Act 1914 was extended, as recorded here.

The court case known as the Stock Embargo case began in March 1917. It was centred on the legality of these two proclamations.

Premier Ryan, as a representative of the Crown argued that by reading the Meat Supply for Imperial Uses Act 1914 and the Sugar Acquisition Act 1915 together, a valid legal framework was created.

The Duncan legal team claimed acquisition of meat would only be valid under the Sugar Acquisition Act 1915 with the end of the war and the consequent expiration of the Meat Supply for Imperial Uses Act 1914.

So, to the outcome … Mrs Duncan’s legal team won; however, following an appeal to the Full Court, the decision of Sir Pope Cooper, Chief Justice of the Supreme Court was reversed in June 1917. Then, in August 1917, there was another appeal, this time by Mrs Duncan’s legal team. This resulted in the High Court restoring the original decision.

Learn more about this intriguing court case by visiting Queensland State Archives and accessing Item ID 861877, the Mooraberrie Cattle case, Duncan v State of Queensland and Item ID 98729, the record of proceedings in the Privy Council on appeal from the High Court between 1916 and 1917.

And what of Mrs Duncan? We learn from research published by the Australian National University that as well as being involved in the court case, Mrs Duncan worked tirelessly for the Australian Red Cross Association and other organisations in support of the war effort. She gave her house Lynne Grove, in the Brisbane suburb of Corinda, as a home for the destitute or orphaned children of deceased First World War soldiers and sailors.

In 1940 Laura passed on the management of Mooraberrie to her daughter, Laura Lothian Duncan. She subsequently retired to her home at Kangaroo Point in Brisbane where she resided until her death on 20 June 1955.

You can read more about this extraordinary Queenslander from Obituaries Australia and the Australian Dictionary of Biography.