Every now and then in our collection we come across a record that on the surface has one purpose and delivers one message but on closer inspection much more can be seen and learnt. Such is the case with this poster created by the Queensland Intelligence and Tourist Bureau (QITB) which gives us a visual glimpse of history in the early 1900s. 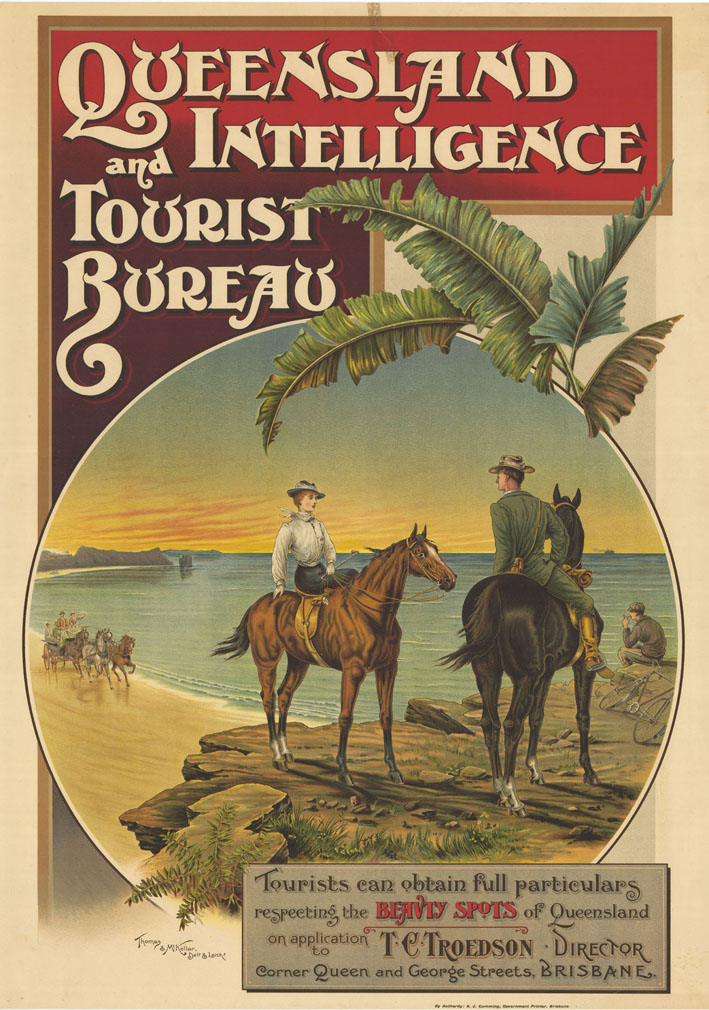 At a glance the poster is advertising beauty spots of Queensland. If we break down some of the components of the poster there is more to be learned. Let’s think about when it was printed.

There is no official date on the poster; it was originally thought to have been printed between 1908 and 1930 because this was when the authorising government printer, A J (Anthony James) Cummings was in office.

Can information about the artists give us a more accurate date of creation? One of the artists is Alexander Robert McKellar. A R McKellar worked as a draftsman at the Survey Office, and according to the Queensland blue books he was still with the Survey Office in January 1917. He died in Brisbane in 1919. So, if we take into account that McKellar may have worked until his death, then we can more accurately date this poster to being between 1908 and 1919, years that included the First World War. As well as contributing to the QITB poster, A R McKellar was a featured artist/draftsman on the Queensland Public Service Patriotic Carnival poster created for a fund raiser to assist wounded First World War soldiers.

If we now focus on the gentleman on the horse in our QITB poster, we see his attire looks like a military uniform. Compare this with the wounded soldier from the Patriotic Carnival poster, see below. Note the similarities in the clothing, particularly the colour and the footwear. Now, compare the gentleman’s hat to the hats of the mounted infantrymen in the image below on the right.

We leave you to draw your own conclusion about why the apparel of the gentleman rider in the tourism poster bears such a striking resemblance to a military uniform. This is because no one can ever be sure whether the rider was a deliberate acknowledgment of the importance of soldiers in Queensland at this time. From our scrutiny we gain insight of the value of posters as a point-in-time visual statement. To find other Queensland tourism posters available online in Image Queensland, try searching using these key words poster tourism.