This article, by Dr Julie Ustinoff, was originally published on the Queensland State Archives website, April 2009.

At approximately 4 a.m. on the morning of Friday 14th May 1943, the Australian Hospital Ship, Centaur was attacked by a Japanese submarine, killing 268 of the 332 people on board. In addition to the ship’s crew of seventy-five merchant seamen (all civilians), the Centaur was carrying medical staff from the Royal Australian Army, nurses from the Australian Army Nursing Service, members of the 2/12th Field Ambulance unit and Australian Army Service Corps ambulance drivers. 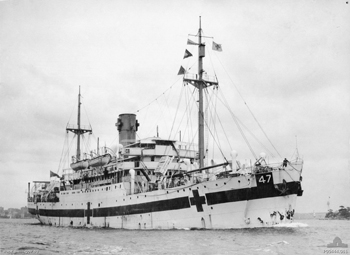 At the time of the attack, the Centaur was sailing through the pre-dawn darkness, east of the Cape Moreton Light on Moreton Island, approximately 50 miles north-east of Brisbane. It was en-route to Port Moresby to collect Australian soldiers who were ill or had been injured in battles at Gona and Buna. The vessel was well-lit and clearly marked as a hospital ship with red crosses and green lines painted on the hull, red crosses on the funnel and stem, and the number 47 painted on her bow. The number 47 was the ship’s international Red Cross number that clearly identified her as a hospital ship.

A single torpedo struck its unsuspecting target with deadly accuracy, hitting the ship near the engine room and oil bunker tanks. The exploding bunkers immediately sent flames flying high into the air along with pieces of metal and wood, and thousands of litres of thick oil, which covered the survivors and the surrounding ocean. Passengers who had survived the initial blast scrambled through the devastation towards the lifeboats and rafts on deck only to find that many had been damaged or destroyed. As a result, most people were forced to grab on to any piece of wreckage in the hope of survival. It took only three minutes for the Centaur to sink, allowing no time to send out an SOS signal.

For thirty-two hours the lonely and fearful survivors clung to small rafts and floating debris. They had little food or water and had to contend with the every-present fear of being attacked by sharks that circled around them. Despite the gravity of the situation, they remained optimistic; singing songs to keep up their spirits.

Eventually they were spotted during the afternoon of Saturday 15th May. A lookout on the American destroyer, Mugford, noticed an object in the water and an RAAF aircraft was sent to investigate. Soon afterwards, Captain E.P. Thomas, the Naval Officer in Charge, Brisbane, received a message from the American destroyer that it was picking up survivors.

Public outrage followed the news of the Centaur’s sinking. Prime Minister Curtin described it as ‘deliberate, wanton and barbarous’ and General Douglas MacArthur, Commander in Chief of allied forces in the Pacific, expressed his ‘revulsion’. The Japanese initially denied any wrongdoing but the official Japanese war history published in 1979 noted that the Centaur had been hit by a torpedo fired from a submarine under the command of Lieutenant Commander Nakagawa.

Following the sinking of the Centaur, a number of commemorative posters and postal stamps were issued, and in Queensland in 1948, the State’s nurses established the “Centaur Memorial Fund for Nurses”. Some of these records can be found at Queensland State Archives. In addition, memorials were built across Australia, including ones along the eastern coast at Point Danger, Caloundra, and Tweed Heads as well as others at the Concord Repatriation Hospital in Sydney and the Australian War Memorial in Canberra.

In early December 2009, the Federal and Queensland governments announced that a new search for the AHS Centaur would be undertaken by Bluewater Recoveries. The wreck of the AHS Centaur was located by the recovery team in the early hours of Sunday, 20 December 2009 about 30 miles due east of Moreton Islands’ southern tip at a depth of 2059 metres.