Many of the sites and buildings that have housed Queensland government records have an important connection to the history of Brisbane.  Many buildings are heritage listed and  we have records about them in our collection.

The Queensland State Archives building, along with some related sites it has been associated with in the past are open as part of the Brisbane Open House 2016.  Book soon as spots are filling fast for tours of the archives or come along on the day to join in the activities and discover what an archive does. If you miss out on this event our Public Search Room is open work days and some Saturdays and regular behind the scenes tours are available!

Some interesting things about the current QSA site – The Jagera Aboriginal people who occupied most of the land south of the Brisbane River are the traditional owners of the area now known as Runcorn. The actual site of the current building in Compton Road has direct links to the initial 1861 survey of the Brisbane Agricultural Reserve in the Parish of Yeerongpilly.  When the original reserve of 7876 acres plus a later 4000 acre extension were opened to selection uptake was limited and slow.  The site remained vacant, probably because of the apparent poor quality of the land and lack of water.  Gazetted in 1899 as a ‘temporary reserve for gravel’ it was eventually transferred in 1925 to Brisbane City Council.  By the 1970s Council was actively using it as ‘a spoil dump and stockpile area’.  They did lease it as a commercial quarry, perhaps to satisfy the growing demand for road and pavement materials with increasing local suburban development such as Sunnybank Hills and Algester.  It’s possible that people probably still walk their dogs, play hopscotch or drive over a little piece of the site every day! 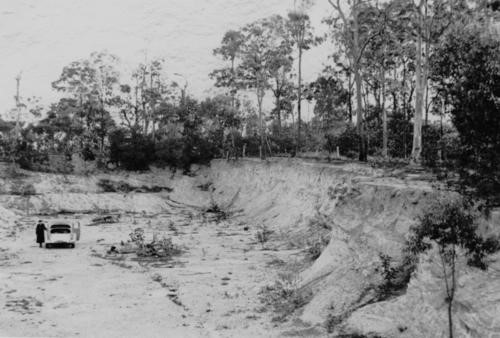 We also know that the reserve was used by recreational shooters in the 1970’s, and probably by many local kids – in fact, one of the current QSA employees who grew up in the area during that time fondly remembers riding trail bikes regularly through the reserve.  Perhaps you know someone who also has stories about what went on there.

Portions of the reserve had been earmarked for state housing, but were exchanged in 1991 with another site at Richmond Road Cannon Hill (R1793) that had up until then been allocated for a new QSA building.  As remaining portions were rescinded by Council it was resurveyed that same year for the new QSA building.  A new 8.087 hectare lot (Lot 1255) was created and a portion reserved for a road that eventually would pass over Compton Road.

So where was the archives’ first home and how did end up at Compton Road?

Throughout the 1960s the collection was also distributed across various sites in Brisbane at different times including in Anzac Square Government buildings and the old Lady Bowen Hospital (the old Chest Clinic in Wickham Terrace).  Even from the outset the first State Archivist Mr Robert Sharman quickly identified the need for a more suitable purpose built home as they grappled with uncontrolled and inappropriate environments, mould, termites and limitations of space. The building was well known to be flood prone and there was apparently a permanent reminder in the form of an indicator on the side of the building of the level of the 1893 Brisbane River Floods which left little more than just the roof exposed.