Sir Thomas B Robinson’s endeavours as Queensland’s Agent General held a unique place during the First World War, but we’ll come back to that part of his story later. Robinson was born on the 24 November 1853 in Rotherhithe, England and moved to Australia in 1881 with his wife, Elizabeth. He first managed the firm Walter Reid & Co. in Rockhampton, then moved to Brisbane to work for Parbury, Lamb & Raff Ltd. This 1894 summary of Capital and Share shows that he remained a shareholder with Walter Reid & Co.[i] 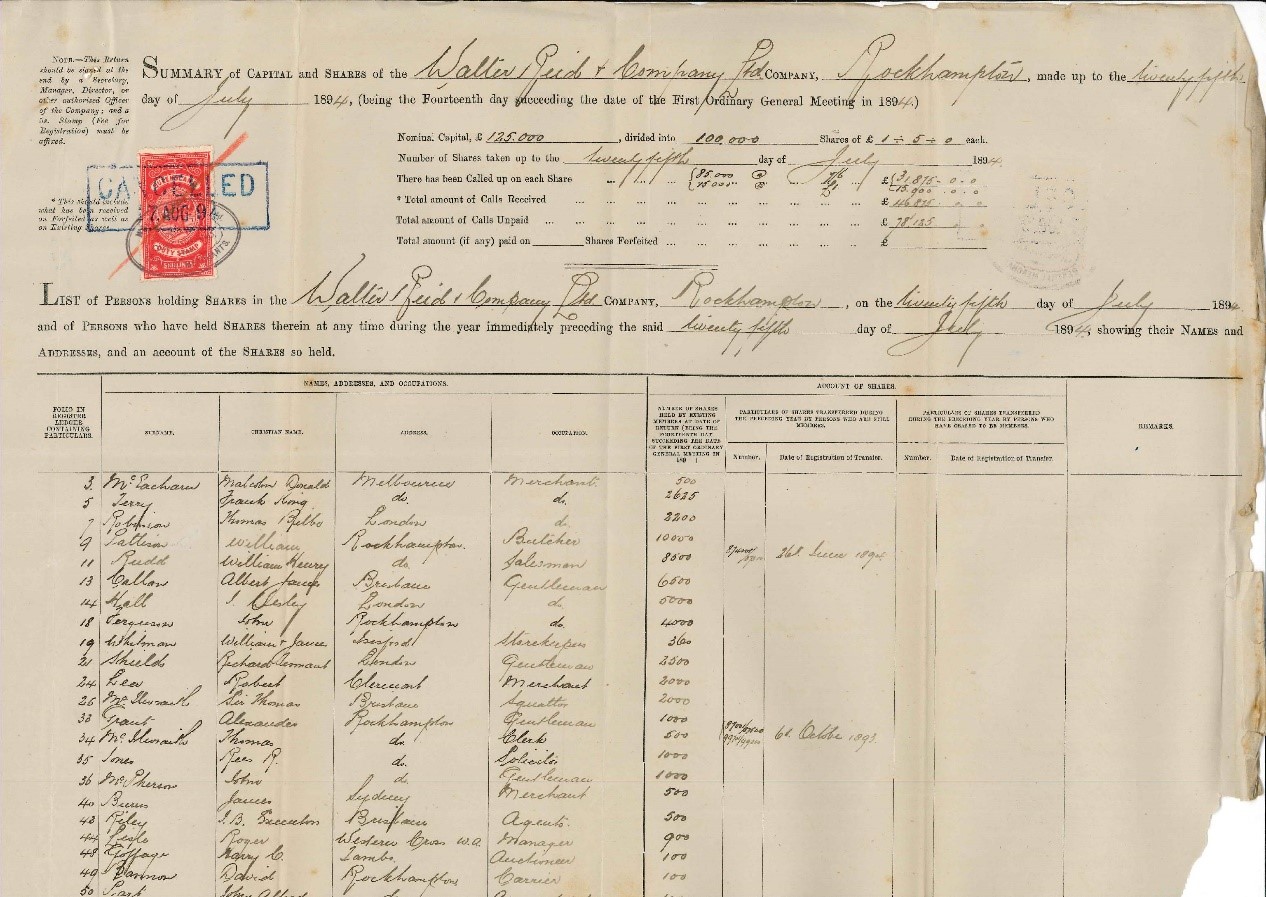 Robinson joined the Queensland Volunteer Force where he rose to the rank of Major in the Moreton Regiment in 1886, retiring in 1893.

After returning to London, he was appointed Queensland Agent General on 1 January 1910 where he encouraged British migration to Queensland, and promoted the state’s export industries. It would be this role that led to Robinson playing a significant part in the war effort.

Two days after the outbreak of war, Robinson declared to Queensland Premier Denham the British Government’s need to get “…all meat…” for which transport was available to export to Britain. 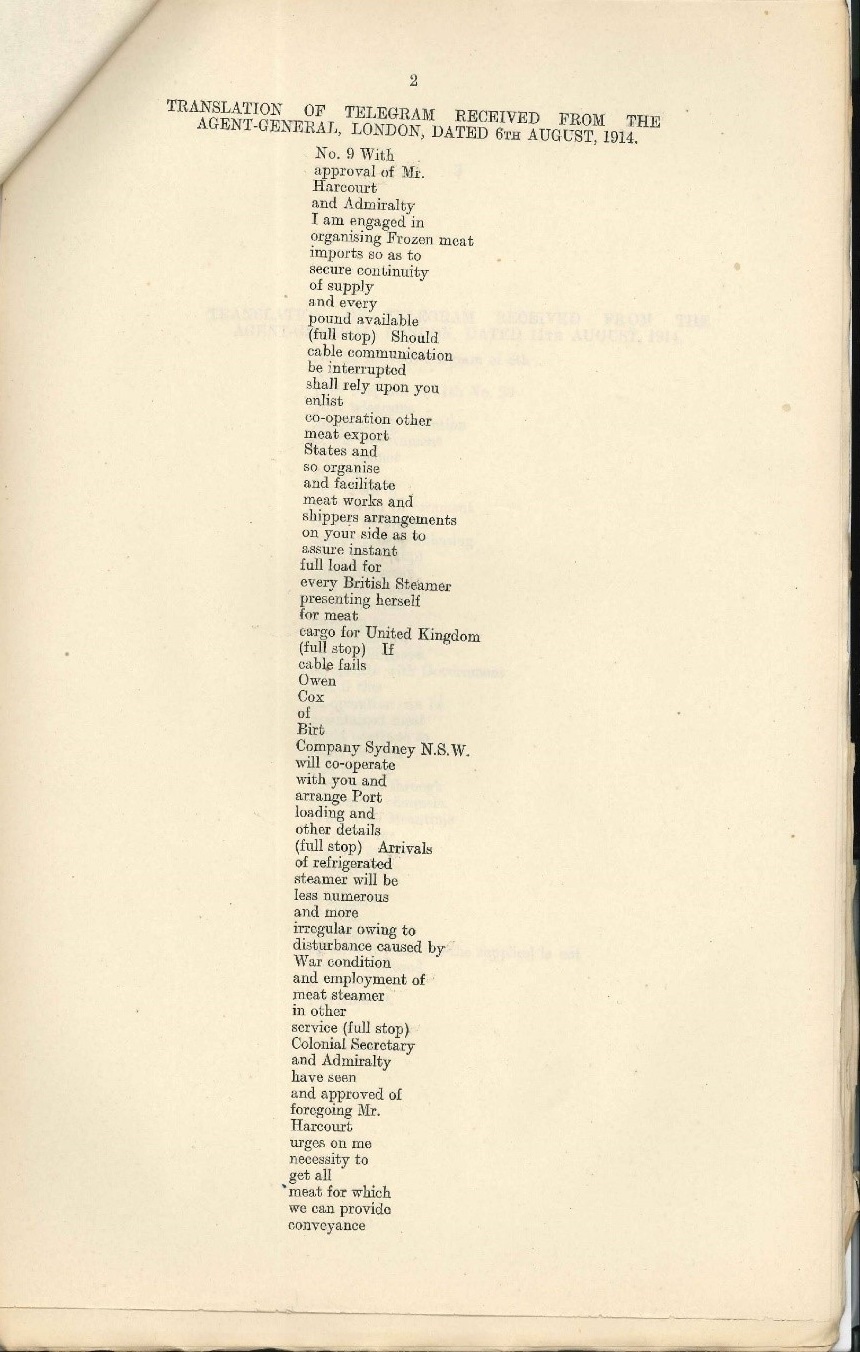 His work coordinating the supply of frozen meat to France and the Middle East resulted in his appointment as director of meat supplies for the the allied armies. His advice to the Board of Trade ensured a regular, price-controlled meat supply to the British domestic market. According to D J Murphy in his biography T J Ryan: a political biography, 83% of all frozen meat supplied to the British Government for the allied forces during the war came from Queensland. By the middle of 1916, Agent General Robinson was explicitly asking for “…as much meat from Queensland…” as possible to allow the British Government to cater for the increasing needs of the allied forces.[ii] 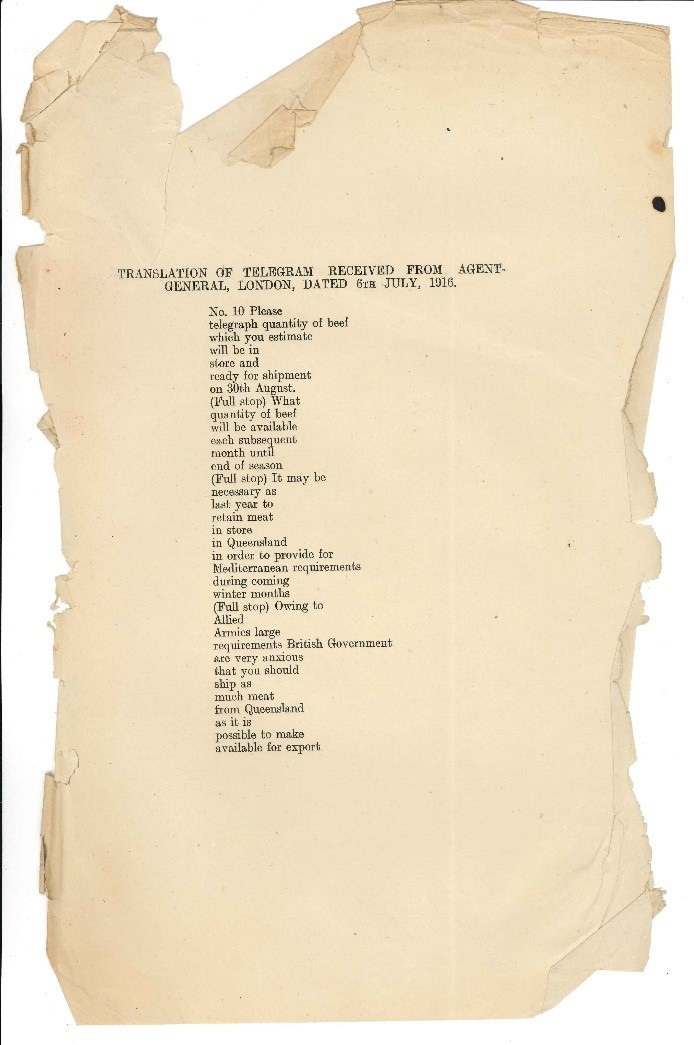 By February 1917, the Hughes’ (Commonwealth) Government moved to control the supply and disposal of stock and meat under the War Precautions Act 1914 for the duration of the war. This prompted Queensland Premier Ryan to telegram Agent General Robinson to flag the notion that the Queensland Government may suddenly need “…to acquire … all cattle that may be available for Imperial uses” under the Sugar Acquisition Act.[iii] 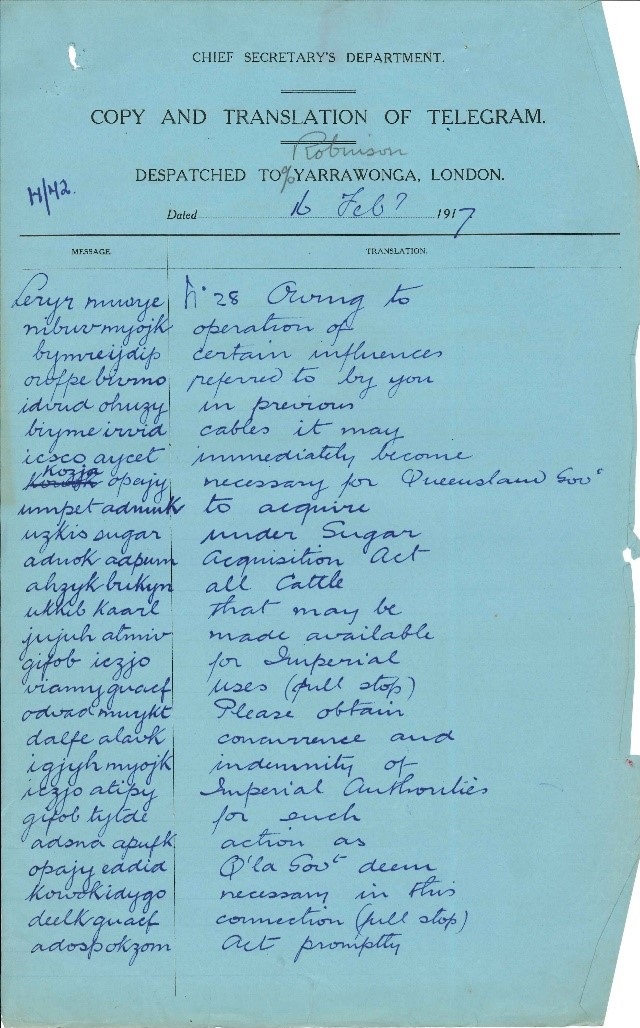 In December 1917, the Australian conscription plebiscite was defeated. Premier Ryan turned to Robinson to tactfully convey a message of continuing solidarity and support for the war to the British people on behald of Australians (Ryan was the only Premier who publically rejected the proposition that Australian troops should reinforce the overseas Commonwealth Forces). The message about Australia’s commitment ended with “[there is no] weakening of her desire to see the Mother country and her allies triumphant.”[iv]

Meanwhile, tensions were escalating between the Commonwealth and the state government as the “Mooraberrie” Theodore v Duncan case progressed. Learn more about this case here. Robinson sent this cable to Premier Ryan on 25 July 1918 expressing concern that if the case was lost by the Queensland Government, this may set a precedent for similar cases to be brought against the Queensland Government.[v] 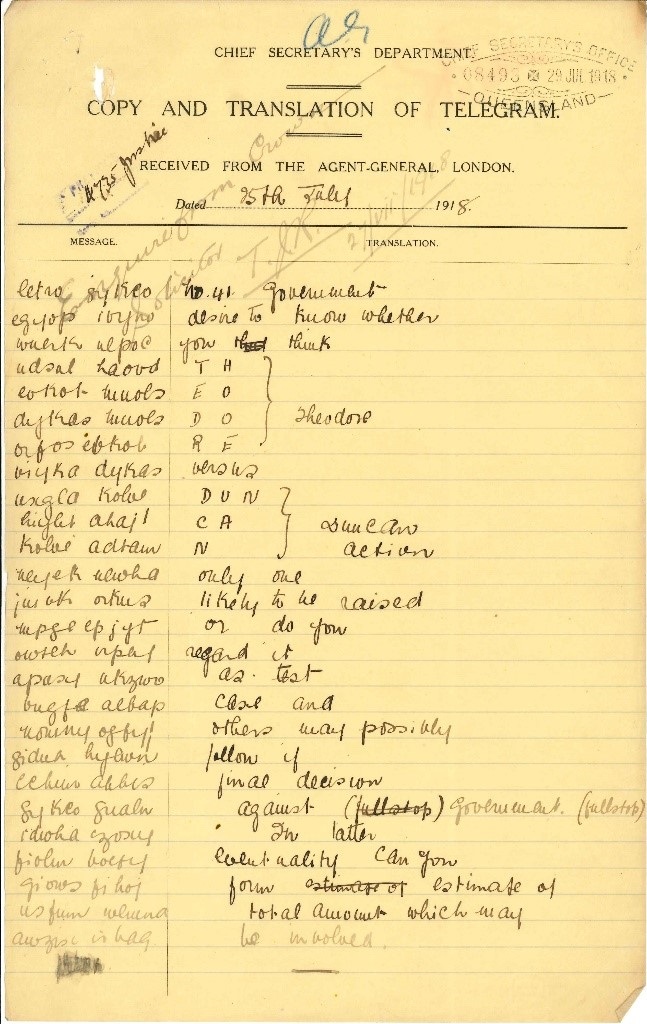 So, was Robinson recognised for his prudent advice, devotion to duty and the forethought he exercised on behalf of the Queensland Government during the First World War? To an extent.

Exchanges between the Governor of Queensland, Sir Hamilton John Goold-Adams between 1916 and 1919 record that the Secretary of State for the Colonies, Mr Bonar Law resisted the earnest requests of Queensland officials (namely, Goold-Adams and Premier Ryan) for a Knight Grand Cross of the Order of St Michael and St George (GCMG) to be bestowed on Robinson.[vi]

However, a search of the It’s an honour web site documents that as well as the Knight Commander of the Order of St Michael and St George (KCMG) he got in 1913, Robinson did end up with these gongs:

Though Robinson returned to live in Queensland after the First World War, he later returned to England and died at his home, Redriff, Broadstairs, Kent, on 15 May 1939, and was buried in the churchyard of St Peter’s-in-Thanet Church.

For those readers who are interested, the list of Australian Knights Grand Cross of the Order of St Michael and St George includes these notable Queenslanders: Harry Chauvel, Zelman Cowen, Arthur Fadden, Harry Gibbs, Samuel Griffith.